A Blog by Willow O’Feral

A world Premiere to remember... 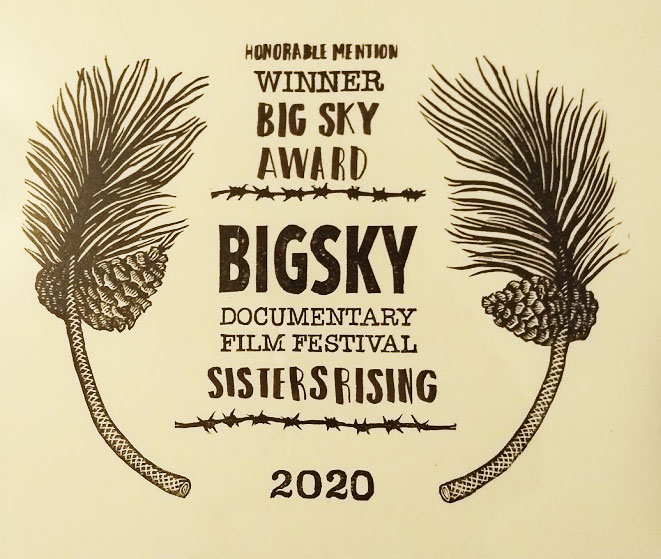 Our documentary Sisters Rising had her World Premiere in February 2020 at the Big Sky Documentary Film Festival in Missoula, Montana, where we were nominated for the Big Sky Award. Our team of director/producers Willow O’Feral & Brad Heck (directors/producers) and Jaida Grey Eagle (co-producer) were all able to attend the Festival, and we had an amazing time.

Our Premiere was on a Sunday at 5:30 PM, standing-room only at the packed venue, with the kind of audience that filmmakers dream of: deeply engaged, emotional and expressive, they laughed in all the right places, booed (at Jeff Sessions), gasped, and wiped tears away throughout the screening (we know, because we sat at the back of the theatre to gauge audience reactions!). Also there were two beautiful, moving Canadian First Nations short docs programmed before our film – When the Children Left, and Keep Going, My Daughter – and we were grateful to be in the company of their talented directors Charlene Moore and Candy Fox (respectively) during our shared Q&A. 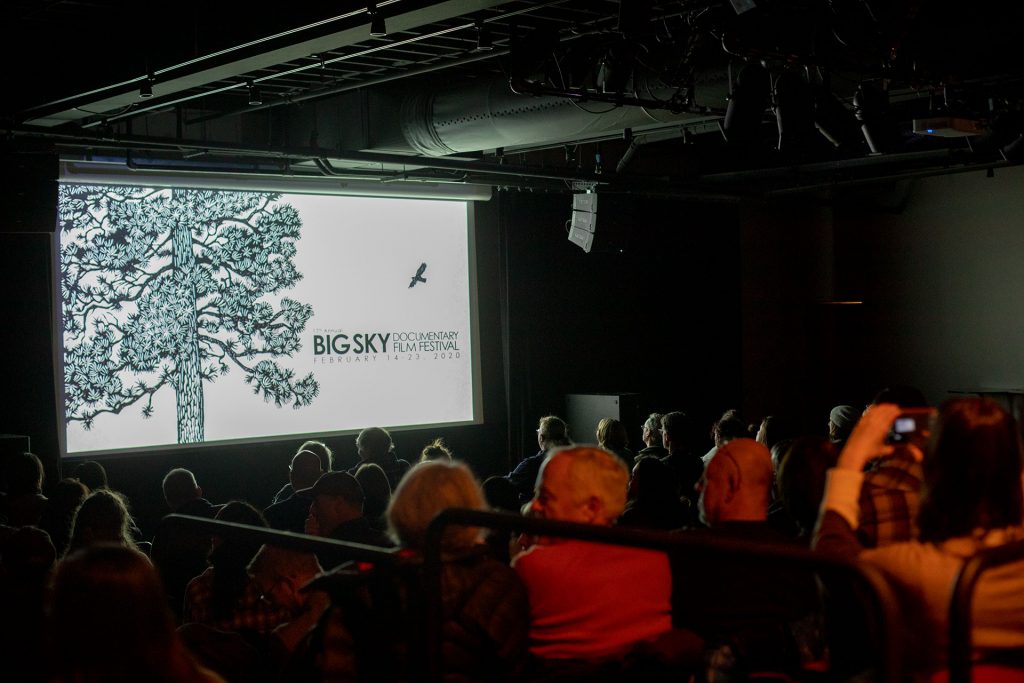 One of the most memorable parts of our premiere screening was the Indigenous youth that surrounded us after the Q&A finished. They were Aaniiih and Nakoda high schoolers from the Fort Belknap Reservation, at Big Sky to premiere their own (incredible!!) short film Looking Forward From Yesterday.

They had an overwhelmingly positive response to Sisters Rising, congratulated us and cried and hugged us. We were overwhelmed with emotions – pride, humility, relief, amazement – but to have these bright young lights from Harlem High School, responding so positively to our movie, was the highest compliment we could’ve imagined. We saw their short film premiere a few days later and we were deeply impressed by their thoughtful, high-quality work. In fact we were so moved that we are hoping to program their short doc Looking Forward From Yesterday to tour with Sisters Rising in the future! 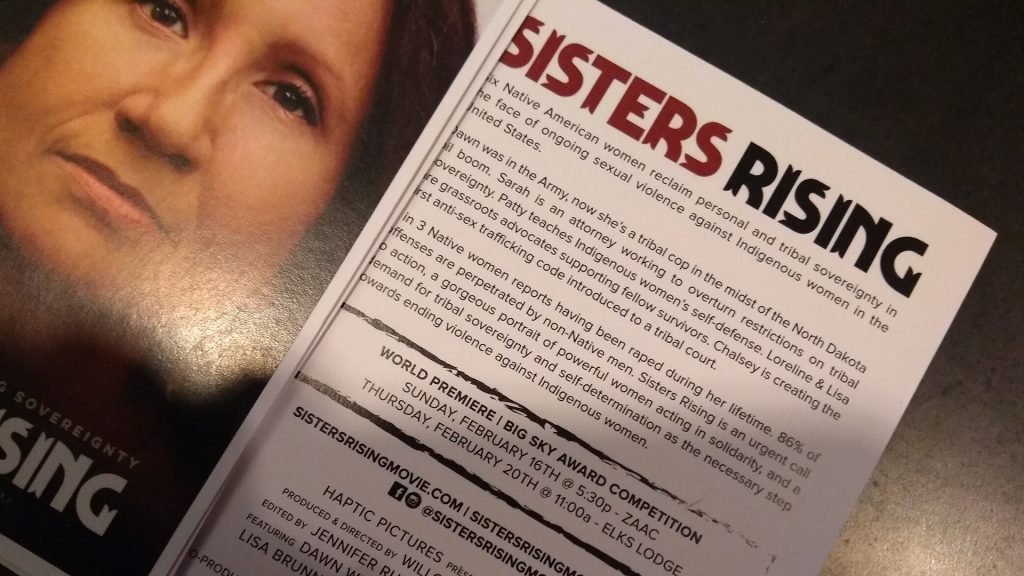 After that, our co-producer Jaida had to leave us. She was scheduled to fly to Berlin from Missoula, to attend the European Film Market and represent Sisters Rising as part of the NATIVe Fellowship Programme, but sadly she was recovering from pneumonia while at Big Sky and it took a turn for the worse right before she was due to fly abroad, and the doctor ordered her to return home to heal up and rest. We were sad to see her go but are relieved that she’s on the mend and doing much better.

Brad and I spent the rest of the week soaking up a dizzying array of excellent documentary films, attending parties and special events, sitting in on DocShop industry panels, talking to filmmakers, producers, programmers – and hobnobbing with the almost freakishly friendly locals of Missoula. 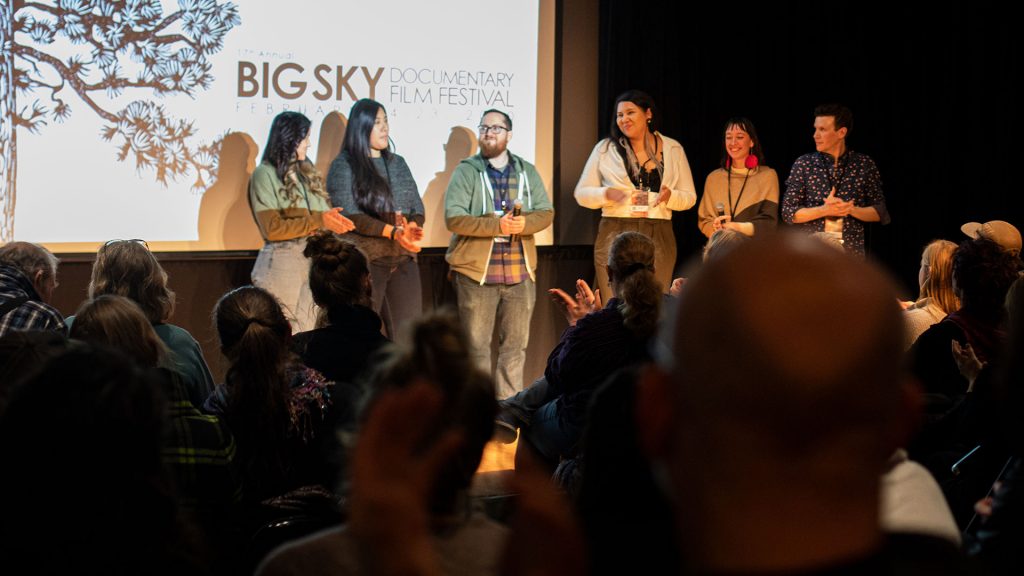 One effect of soaking in all these social issue documentaries is that I found myself becoming, over and over, utterly enraged with my country and horrified by the harm we wreak – hateful policies and actions towards women, immigrants, the environment, children, the elderly, Native Americans, African Americans, queer people, working-class folks, our lack of adequate healthcare, our predilection for destroying public lands and desecrating sacred sites, and I could go on.

It was sobering but somehow didn’t leave me utterly hopeless. Why? I guess because, even though our country really stinks in so many ways, at least at Big Sky I was surrounded by a ton of people who care deeply about these issues, and are working their butts off to right wrongs and make the world a better place. The filmmakers at Big Sky had such big hearts, as did the programmers, the volunteers and staff, the audience-goers, and then of course all the heroic people depicted in their real-life struggles on the big screen.

It felt very American: to be in America, criticizing America, at a film festival chock-full of American documentaries that are taking America to task (not all the films were American or were set in the US, but the majority were). I guess I feel proud of that, even if it’s a slim consolation for the horrors of injustice, oppression, and suffering captured on screen. 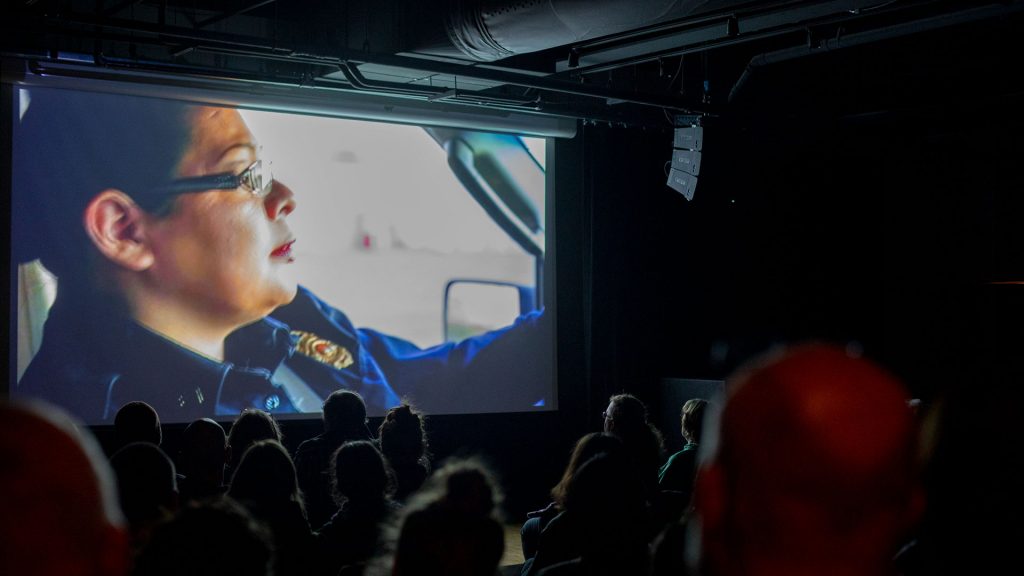 We had our second Sisters Rising showing at Big Sky on Thursday morning, at an old Elks Lodge in downtown Missoula. The ‘filmmaker’s lounge,’ converted from the Elks’ upstairs bar, was entirely ringed around by hundreds of framed black-and-white photographs of old white men on all four walls up near the ceiling. We came up with a great idea that we could sneak in some framed portraits of women and people of color and hang them up there alongside the good ol’ boys – see if anyone would notice. 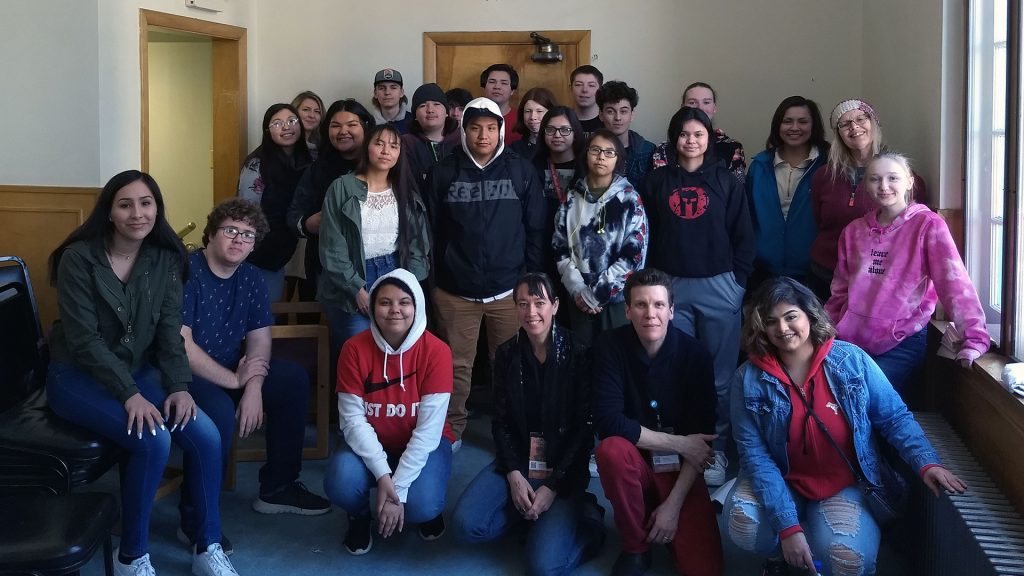 But we didn’t have time to do it! Rats. It was another fantastic turnout at our second screening – especially for a weekday morning – and again the best part about it was a group of Indigenous youth who came to see our film! Jaci Webb, a Ronan High School teacher on the Flathead Reservation, had taken it upon herself to get a bus of 23 students to make the 2-hour round-trip trek down to Missoula, just for our screening! We had lunch with all the students after our film, asking them questions, and answering theirs. 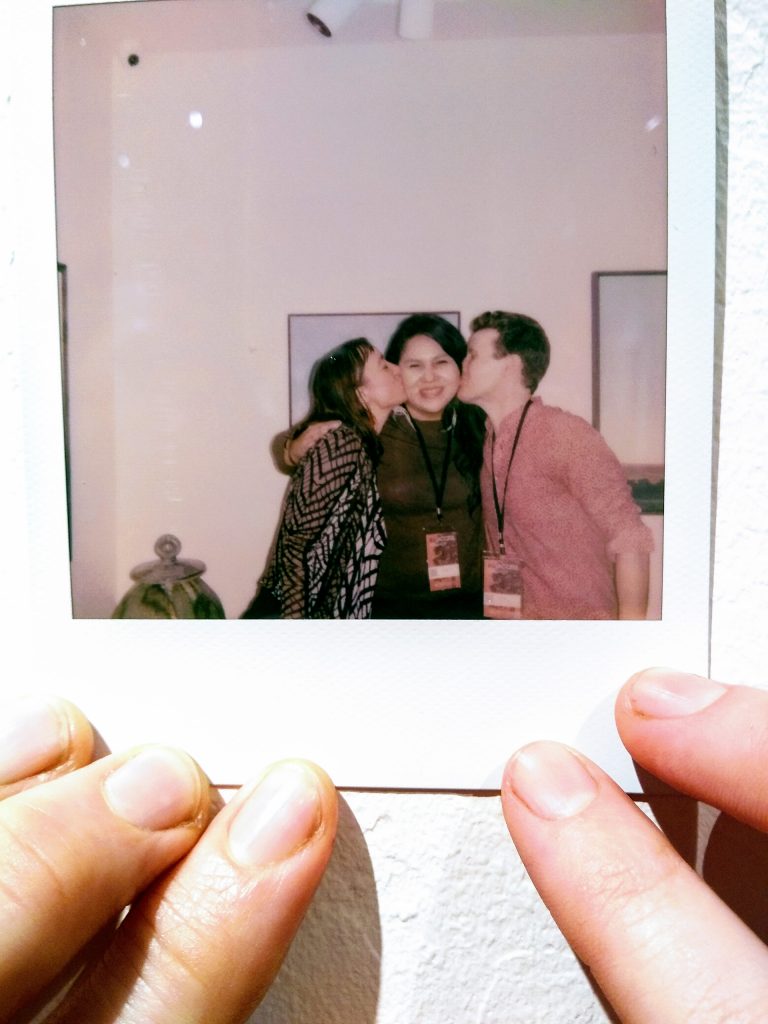 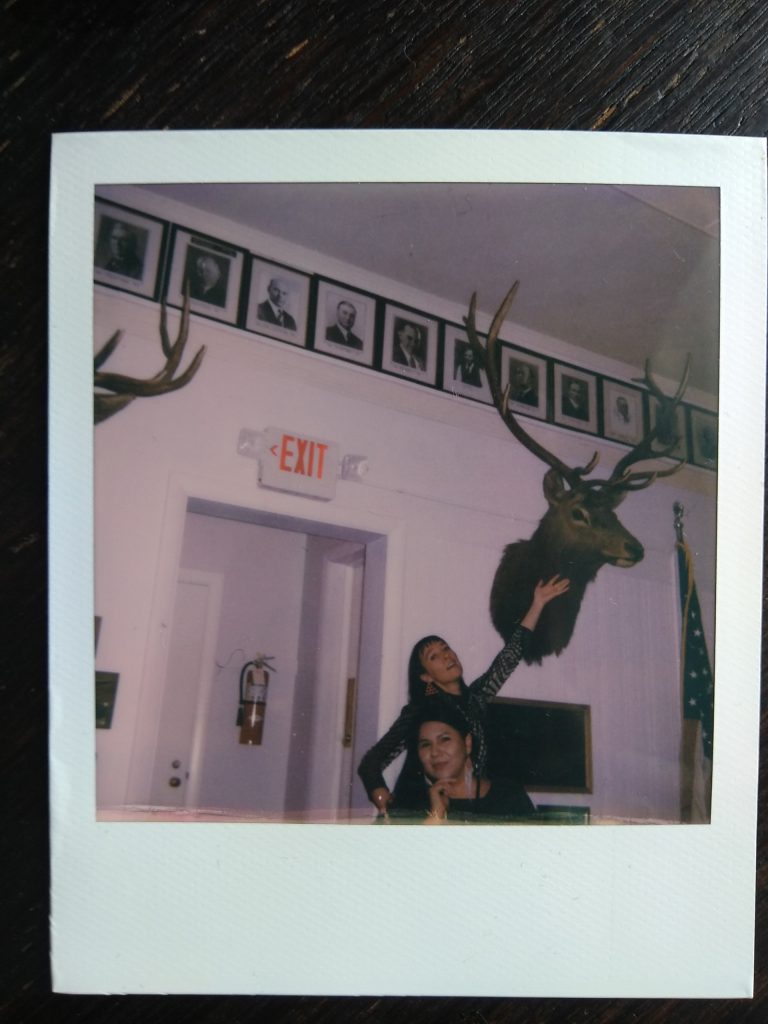 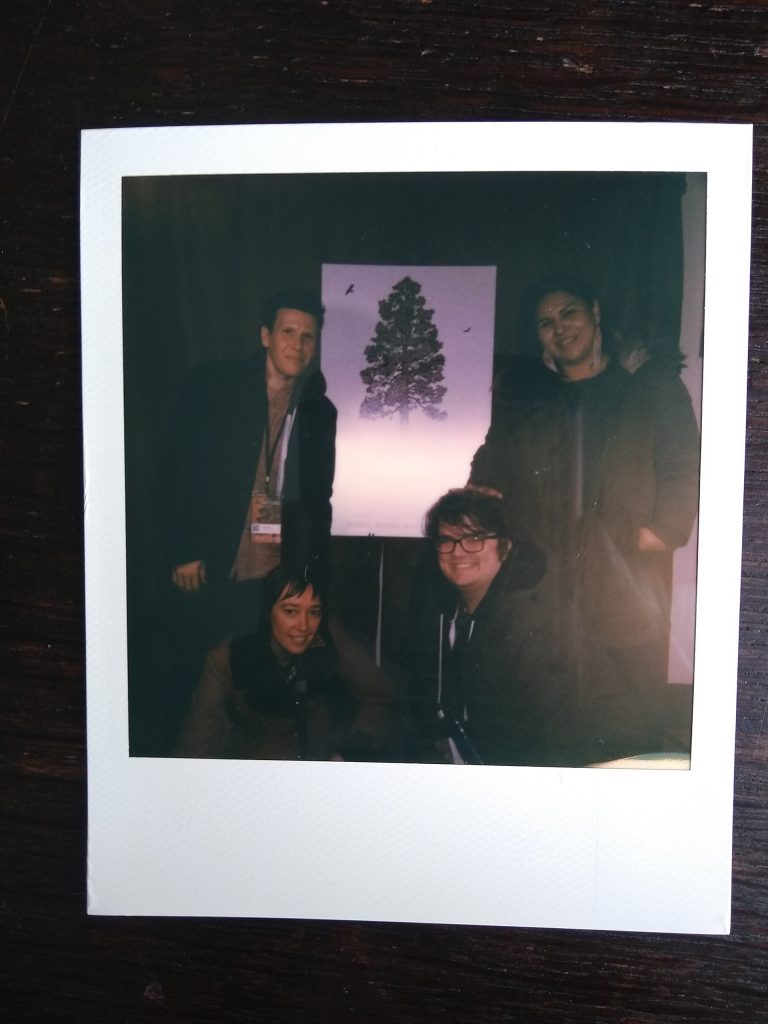 One big surprise was that one of the students turned out to be Dawn White’s niece!! (Dawn is one of the women featured in Sisters Rising, and she’s Arikara from the Fort Berthold Reservation inNorth Dakota). The students were funny, frank, engaged and curious – we only regret not being able to spend more time with them.

We also had our first Sisters Rising radio interview, with Sarah Aronson, the host/producer of The Write Question, a long-form interview program on Montana Public Radio. Brad and I were really nervous and worried that we would say stupid and regrettable things, and I can’t promise you that we didn’t, because we haven’t heard it yet! But Sarah was lovely and so was her audio engineer Beau Baker, they did their best to put us at ease, and Sarah asked great questions. 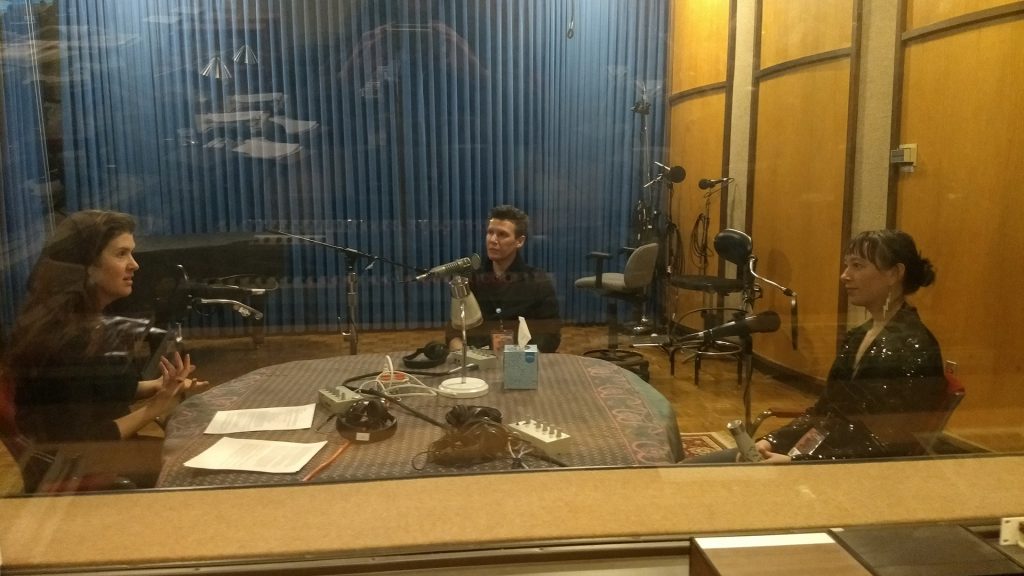 We met two fabulous women, June Jennings from Field of Vision and Dara Messinger from DCTV/Meerkat Media, who graciously lent us sound advice and tips about one of our next major projects with Sisters Rising.

We want to develop an engagement/impact campaign for Sisters Rising, but we don’t know how to go about it or what that entails. Both June and Dara have outreach experience and we were grateful to pick their brains. We also finally met Kristen Fitzpatrick, formerly of Women Make Movies but now with Field of Vision, with whom we have spent probably 6-8 eight hours cumulatively on the phone over the past year, but had not yet met in person! Kristen is one of the main reasons we decided to sign on for Sisters Rising distribution with Women Make Movies, and finally meeting her in person was a huge treat.

Also we fell in with the small horde of New Day Films members who happened to be at Big Sky either with new films (Suzan Beraza with Massacre River, Annie Small with Colette) or participating on DocShop panels (Julia Reichert, who co-founded New Day Films in 1971, and Jonathan Skurnik), and that was wonderful because New Day creates a cozy warm sense of community wherever they are (Willow is a member of the New Day cooperative with her other doc, Break the Silence).

And finally, the last night we spent in Missoula was at the Big Sky Awards party, where we nervously mingled with new friends and tried to act super chill. We won an Honorable Mention Big Sky Award, which was wonderful especially seeing the fierce competition we were up against with the other four nominated films! Here is the statement from the Big Sky jury: “In a portrait of six brave participants who refuse to let a pattern of violence against Native women continue on in the shadows, this film shines an unflinching and ultimately uplifting light onto righting injustice on both an individual and systemic level.”

Thank you to all the folks at the Big Sky Film Festival for this wonderful experience. And many many thanks to Vision Maker Media for supporting us on this journey. We can’t wait to see where Sisters Rising goes next.